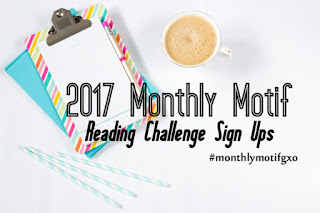 JANUARY – Diversify Your Reading Kick the reading year off right and shake things up. Read a book with a character (or written by an author) of a race, religion, or sexual orientation other than your own.

MARCH – Time Traveler Read a book set in a different dimension, a book in which time travel is involved or a dystopian or science fiction book where reality looks very different than what we’re used to.

APRIL – Award Winners Read a book that has won a literary award or a book written by an author who has been recognized in the bookish community.

MAY – Book to Movie or Audio Read a book that has a movie based off of it. For an extra challenge, see the movie or listen to the audio book as well.

JUNE – Destination Unknown Read a book in which the character(s) take a trip, travel somewhere, go on a quest, or find themselves on a journey toward something.

AUGUST – Seasons, Elements, & Weather Read a book in which the season, the elements, or the weather plays a role in the story.

OCTOBER– Games, Challenges, & Contests Read a book that involves a game of some sort. Video games, war games, psychological mess-with-your-mind games, characters who participate in a contest, or a story in which the character takes on a challenge.

NOVEMBER – Last Chance Read a book you’ve been meaning to get to all year but haven’t yet or read the last book in a series you started.

DECEMBER – Picking Favorites Read a book by one of your favorite authors or read a book that Girlxoxo has recommended this year.